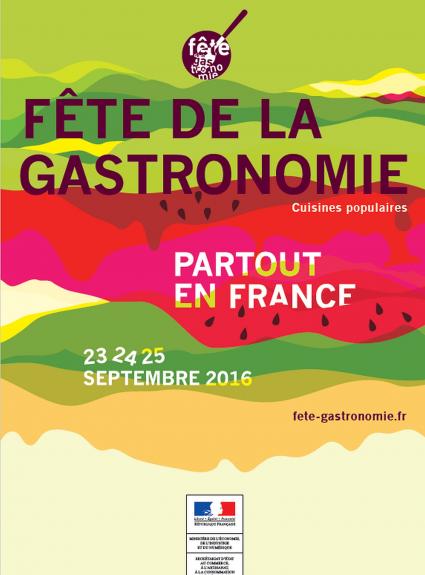 Published on 9 September 2017 in Gastronomy

Building on the success of previous years, Fête de la Gastronomie returns in September for three days of shows, meetings and demonstrations. It offers industry professionals and casual visitors the chance to participate in one of the culinary world’s ‘tastiest’ events.

The first Festival of Gastronomy took place in 2011 following the inclusion of the ‘gourmet French meal’ in UNESCO Intangible Heritage listings. Indeed, it’s hard not to appreciate something that many view as the premise of experts, but which is simply a way of life to most French people. Last year, over 11,000 events took place over the festival’s three days including picnics and banquets -some of them organised by top restaurateurs. For 2016, the festival has chosen the Popular Kitchen as its main theme. Forget that stale image of the guest who dreads using the wrong fork during a formal meal! The goal here is to illustrate gastronomy’s common good; the good that comes from the land and its produce, or the good culinary traditions that are reinvented by ordinary people every day. Friendliness, joie de vivre, flavours and sharing will the watchwords of the 2016 edition of Fête de la Gastronomie.

Practice for the Fete

Although this great festival takes place all over France, and even abroad, many of its main events take place in Paris. Why not sign up for a cookery class during your stay at one of the Hotel Company Bagatelle hotels? The idea is to reinvent and mix things up as you create original dishes inspired by our most popular recipes; a Breton fondue or bouillabaisse Auvergne, for example! Be amazed by the ideas of the restaurateurs and their interpretations of this festival: a picnic in the Jardin des Plantes, a culinary competition with collective restaurant chefs or a gourmet tour of the ancient halls of the ‘belly of Paris’…
Explore inventive, popular gastronomy and friendship from 23rd to 26th September. Go on, give your taste buds a treat!