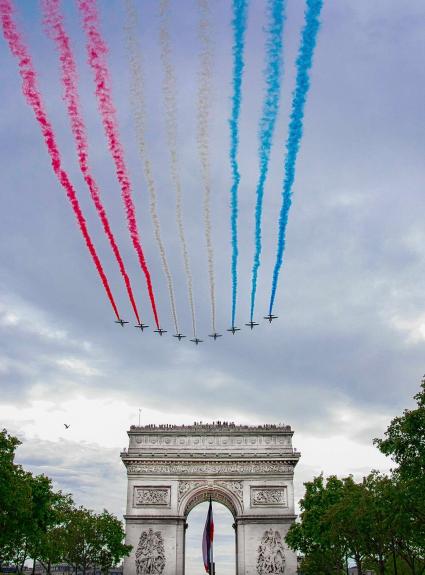 The Fête Nationale, often referred to as Bastille Day, brings to Paris a very special celebratory atmosphere. During your stay in one of the six hotels of the Compagnie Hôtelière de Bagatelle, you can join in with the exciting events scheduled for July 14th. From the traditional firefighters' ball to the ultra-trendy Garden Party at the Paris Longchamp racecourse, not to mention the splendid fireworks display, don't miss a thing!

The most impressive and inspiring July 14th event is the military parade. Find a good vantage point on the Champs-Élysées as the parade passes along the entire length of that world-famous boulevard and you will be witness to one of the oldest events of its kind in the world. Gleaming uniforms, stirring music, the prowess of the Patrouille de France precision aerobatics unit… It’s a hugely impressive show. In the evening, it seems like all of Paris gathers at the foot of the Eiffel Tower for the 23:00 start of the great fireworks display launched from the Champs de Mars. Magical!

Many nightclubs and bars offer themed evenings on Bastille Day, but traditionally it’s the balls hosted by the fire service that are the most well regarded. The generations mingle in a good-natured atmosphere, to dance the night away. Or you might prefer to head to the Paris Longchamp racecourse to attend the prestigious Garden Party. You can watch the horse races and then throw some moves to the sounds of sets by top DJs. For the moment, the line-up is still under wraps…

When you stay in the hotels of the Compagnie Hôtelière de Bagatelle, you’ll have the opportunity to experience the liveliest districts of the capital. That means you’ll be within easy reach of the various events organised for July 14th, Bastille Day. All you have to do is plan your itinerary!