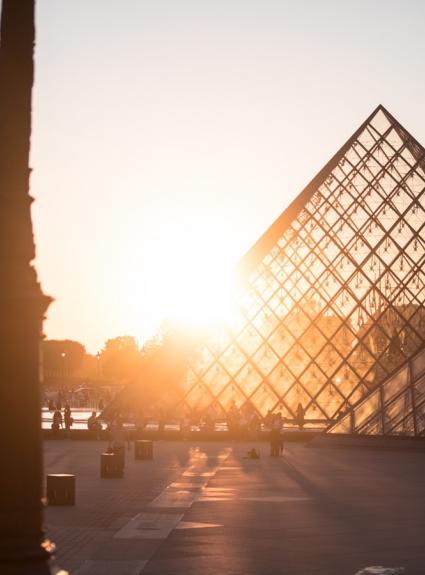 Who remembers the controversies that arose thirty years ago when this glass and steel modernist structure was constructed adjacent to the splendid classical architecture of the Louvre? The fuss gradually died down and today we see only the beauty, the lightness and the originality of this pyramid as it plays with transparencies and reflections. It now seems perfectly suited to its role as a portal to the wonders of the Louvre Museum!

A Pyramid in the heart of Paris

This magnificent structure, enhanced by natural light during the day and by carefully designed artificial lighting at night, has now become totally inseparable from its setting. The Louvre Pyramid has become the third most popular attraction for visitors to the museum, after the Mona Lisa and the Venus de Milo. It’s also an incredible technical achievement, a fact often overlooked due to the majesty and lightness of the whole.

The Louvre Museum; some facts and figures

Of course, the whole world knows about the Louvre and the great works it holds, such as the Winged Victory of Samothrace and The Coronation of Napoleon. Not everyone knows, however, that this is the largest museum in the world. Even at the rapid rate of 30 seconds per room, it would take about 100 days to view it in its entirety. Always enthralling, it attracts some 15,000 visitors per day on average for a total of 9.5 million per year. Most of them are, of course, bewitched by the Mona Lisa smile!

This exceptional museum needed a unique work. This was provided thirty years ago by the architect Ieoh Ming Pei with his astonishing Pyramid. An attraction to discover and rediscover, just like the Louvre Museum!