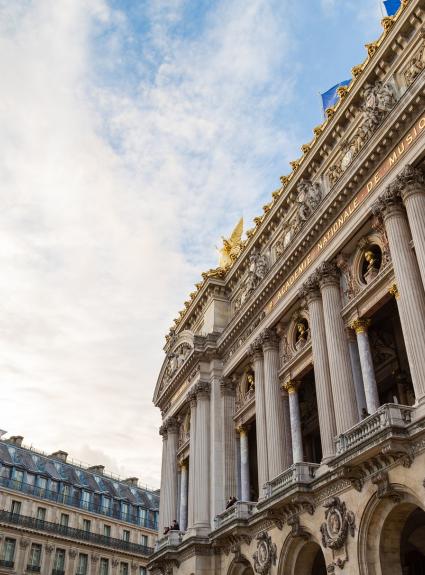 Focus on the Opera district

Published on 5 October 2018 in Discover Paris

With its Haussmann avenues, the 19th century Palais Garnier, its fashion chains, its grand hotels and fine grocery stores, the Opéra district presents visitors with the quintessential image of Paris. Discover or rediscover the beauty and diversity of this delightful neighbourhood.

The Opera district - an unequalled heritage

The Palais Garnier is the unmissable starting point for your discovery of the district. The 19th century landmark with its majestic staircase, gilding, statuary and marble is a shining example of the triumphant architecture of the Second Empire. It also echoes the magnificent Haussmann buildings, illustrations of the building frenzy that gripped the capital during the second half of the 19th century,  that line the surrounding avenues. Less famous but just as charming, the district's heritage also includes covered passages and galleries such as the Passage Choiseul.

The Opera district is a hive of activity. It’s one of the capitals prime shopping areas thanks to famous department stores like Printemps Haussmann and Galeries Lafayette as well as dozens of unique retailers.

Several places invite you to plan original and entertaining outings, for example, the Fragonard Perfume Museum or the Musée Grévin where you're sure to enjoy taking selfies with over 200 famous stars and personalities – well, at least their wax counterparts. Or, to learn more about the history of Paris including big events and little-known anecdotes, try Paris Story.

Finally, lovers of the exotic might head for the tiny Japanese district. Just a few steps from the Palais Garnier, it's the ideal place to sample succulent Japanese specialties.

With four of its hotels located in the Opera district, or in the immediate vicinity, Compagnie Hotelière de Bagatelle invites you to discover this character-filled area of Paris. Combining luxury and heritage, entertainment and culture, gastronomy and fashion, the Opéra district offers a first-rate Parisian experience!