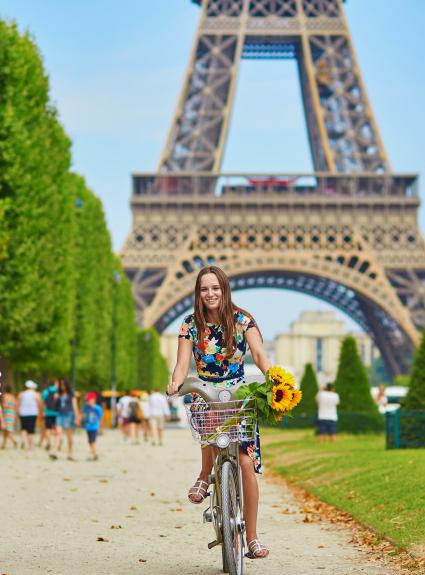 Paris and cycling; a love story

Published on 5 July 2019 in Discover Paris

For some years now, Paris has been mad about cycling. Self-service bicycles, guided tours, bike paths; everything is done to ensure a smooth ride for cyclists. What’s more, it will soon be time for a big bike party due to the arrival of the Tour de France!

A bike ride in Paris

Get in the saddle and Paris is at your feet… or should we say beneath your wheels? You might wish to rent one of the city’s Vélib' self-service bicycles to go from your Compagnie Hotelière de Bagatelle hotel to the museum, the closest shopping districts or the theatre. Or maybe you would prefer to enjoy pedal-powered tours of the capital’s loveliest sites accompanied by a guide. Finally, there are some great set routes that allow you to explore the most beautiful streets of Paris at your own pace or take a cool and refreshing ride in the city’s two largest parks, the Bois de Boulogne and Bois de Vincennes.

Every year, for a day, Paris goes yellow jersey crazy and turns its back on cars to welcome the riders of the Tour de France, exhausted by three weeks of gruelling competitive racing. On July 28th, they will compete in a final effort along the capital’s beautiful avenues, leading up to the climactic sprint finish on the Champs-Elysees. The hugely popular Tour de France is welcomed by crowds lining the streets. Parisians passionate about cycling give their warm support to those who have survived the alpine and Pyrenean passes, sprints and time trials, rather than taking it easy on cafe terraces!

The Compagnie Hotelière de Bagatelle's values ​​are caring, creativity and commitment, principles that fit in perfectly with the world of cycling. Discover another side of Paris, one that’s freer, more relaxed, and pulses to the rhythm of turning pedals.